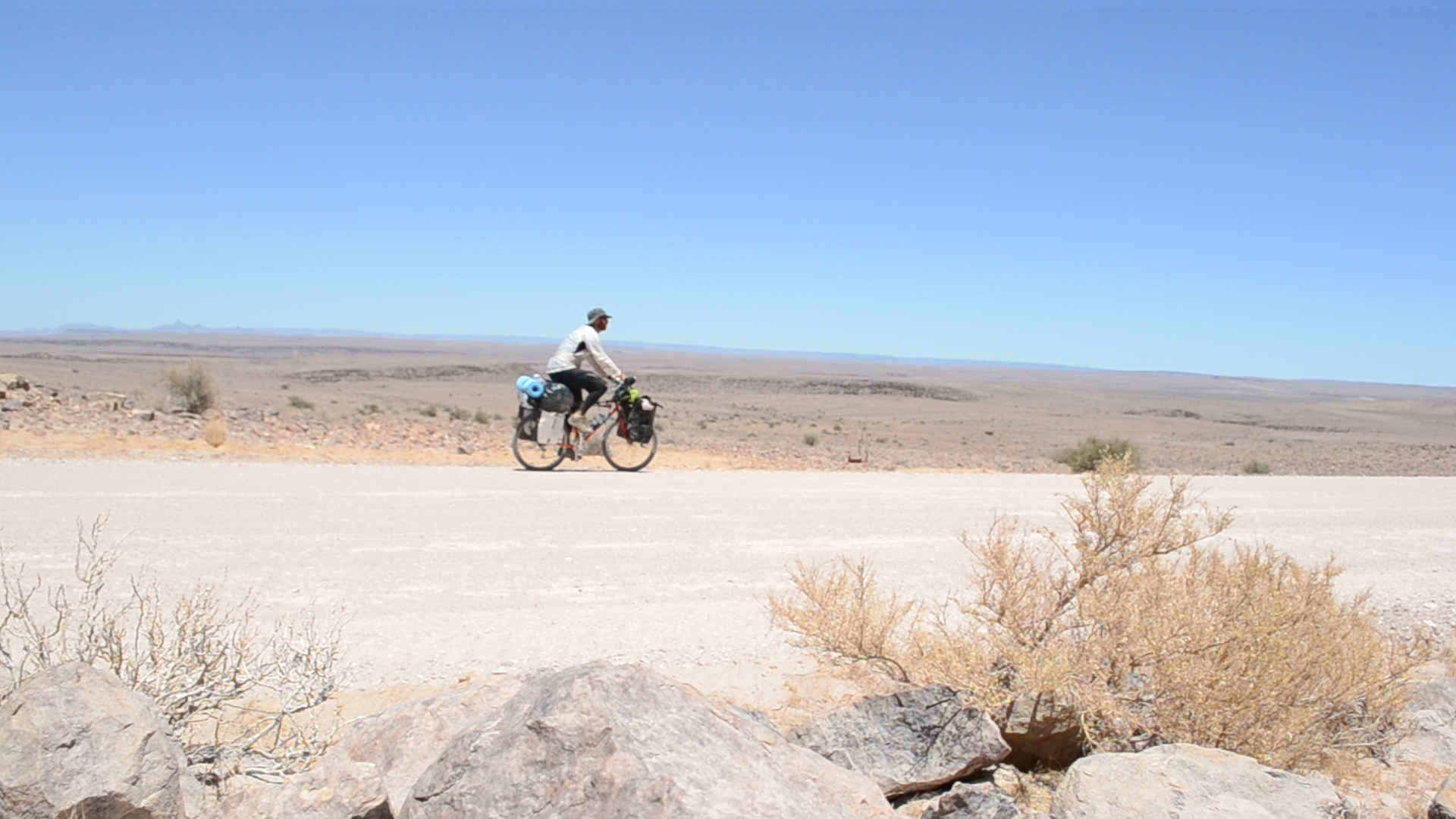 A Landrover full of tourists pulls up alongside my bike on the ground, “Are you okay??!!”. Man, was I glad to see them.  Not everything is as it seems on a cycle tour in Africa and I certainly learnt the truth about being alone cycling across Namibia. I guess it’s quite a common thing, to feel like things could be better in life or wish “something” new and different would happen but then it always seems like “the grass is always greener” at the time.

The past two weeks of the Africa bicycle tour were reminder that not everything is as it seems and sometimes what we are looking for has been with us all along. In my case it didn’t take long to realize what that “something” was exactly. The truth is, I had such high hopes about travelling alone in this isolated part of the world by bicycle and what I could learn from the experience of being alone, but in the end it didn’t have the profound life changing effect I expected……or did it? 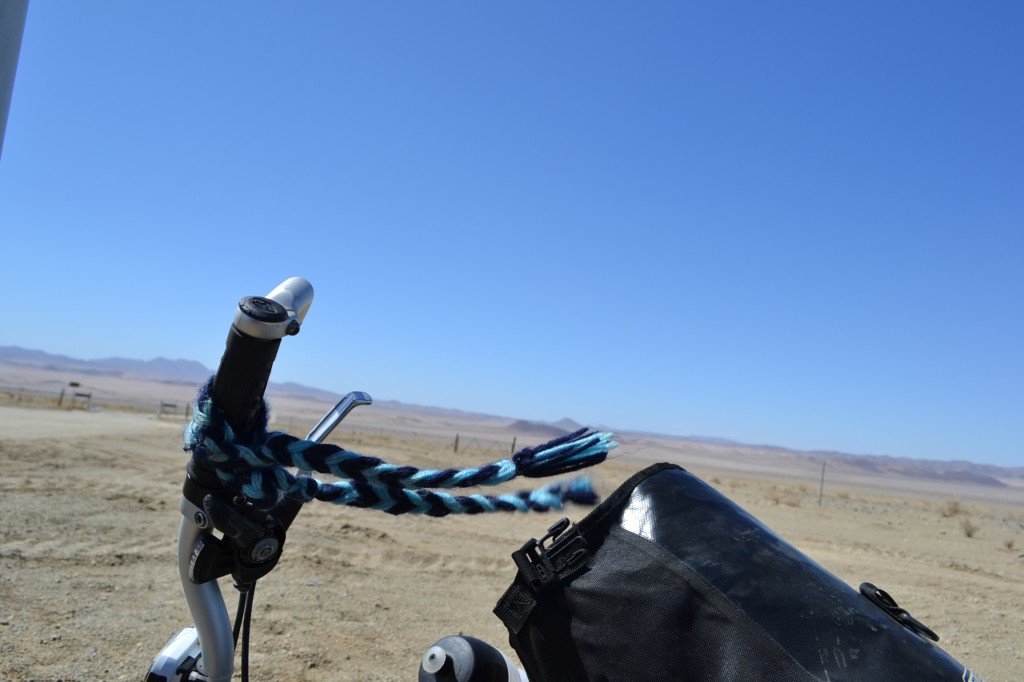 Honestly, it was like riding a bicycle into an oil painting, I just couldn’t get over how big everything looked, exaggerated and instead of being intimidated, I found myself exactly where I wanted to be, in that moment in time. It was proper crazy and I wondered back to school years

“imagine being told, I would one day do something on this scale in the future”

It wasn’t long before animals were popping up everywhere either, I really didn’t expect to see any so soon never mind this many, and it seems one advantage of my safari vehicle is that the animals don’t hear the bike until the last minute allowing for amazing close-ups? There are no lions in Southern Namibia, Leopards are shy and few Hyenas so safety didn’t concern me regarding the wildlife.

However, the conditions could not be ignored and the weather was so much worse than before. It was now above 40 degrees, the roads were awful, a terrible headwind powered for most of the days and the novelty of being in a desert was wearing off. From day one cycling in Namibia it was a test of endurance but mentally, it was far worse for being alone.

The sunsets are incredible and without a fly sheet, the stars make sleeping in the tent a dream but there have been interruptions in the middles of the night when some neighbors drop by and I can confirm that being woken unexpectedly is nowhere near as bad as not knowing who it is.

In the morning the spoor (animal prints) around the tent show springbok and zebra to be the main culprits, although last night it was chickens as I pitched the tent next to a farm. 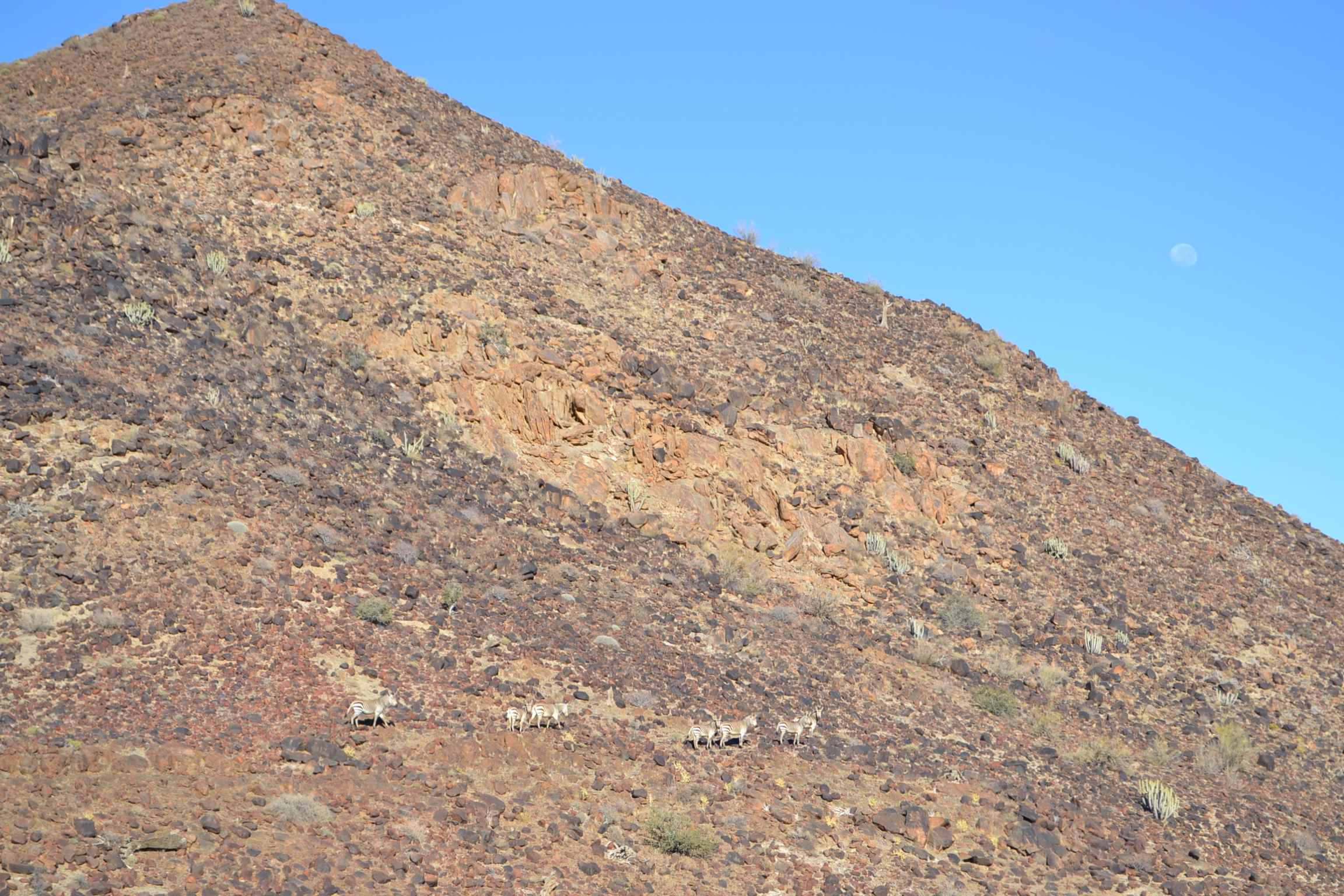 Unfortunately my lense is not powerful enough, you can just about make out some Zebra on the hill. There’s also been many Springbok, Klipspringer, Oryx, Ostrich 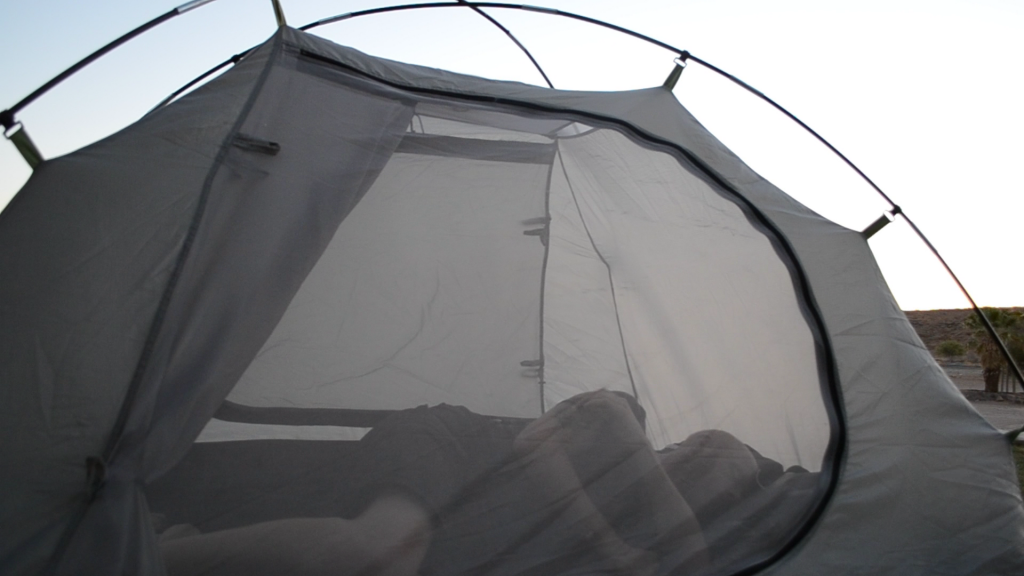 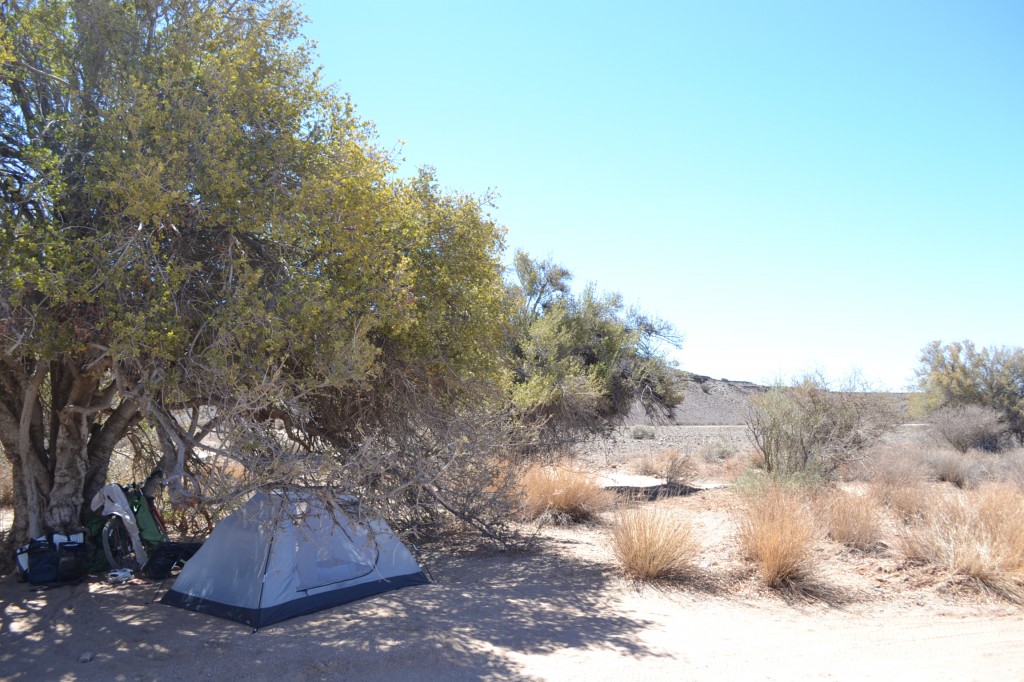 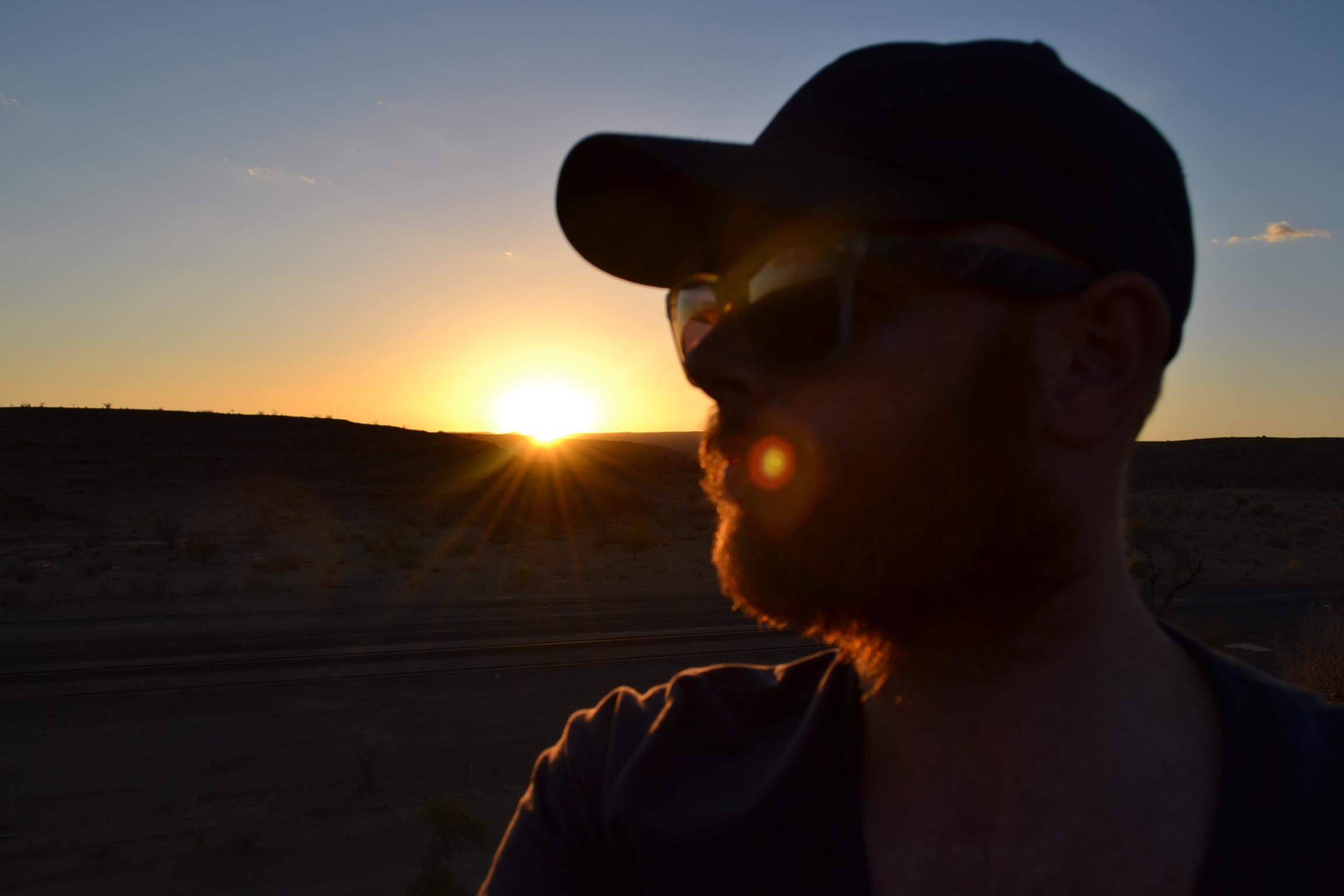 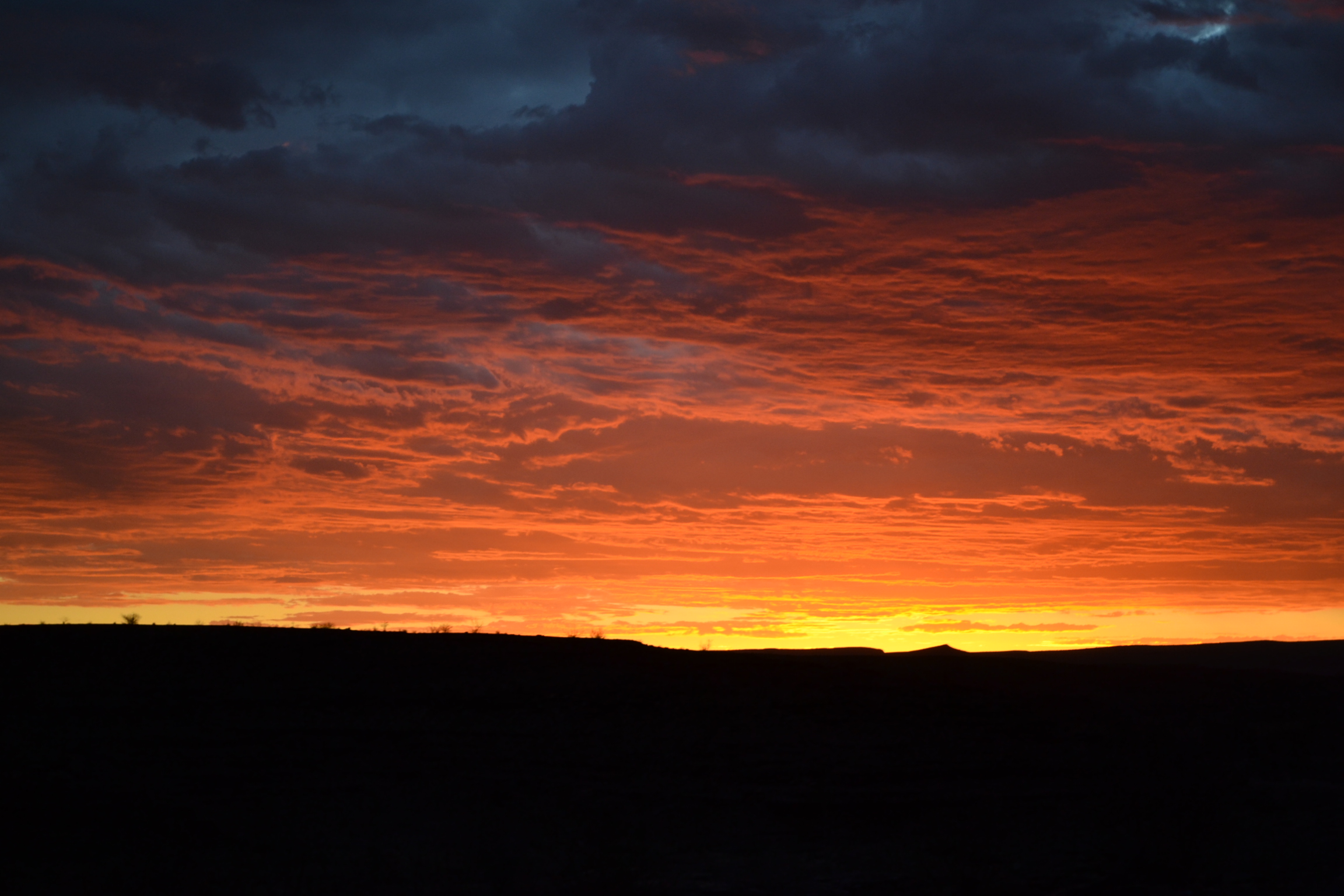 A Brainstorm (The Longest Day)

The sun is a sign of life in many parts of the world but here it’s the reason for it being so non-existent, it saps my energy. Near Ai Ais, Southern Namibia, progress was slow with something bothering me that morning but I wasn’t sure what exactly.

By midday, demotivated and really struggling in the heat, I found a small tree to cool down underneath. There was a great distance still to go so I didn’t dare stay too long and hit the road again, which is when the wind really blew. Now coming sideways, it would literally blow me from one side to the other then right off the road although strangely, there was something fun about the misery it was inflicting. I taunted back “I’m an Irish adventurer, it’ll take more than hot air to stop me”. Then I stopped, crouched down behind the bike and held on to my hat for a while.

Gale force winds continued to blow overhead and I couldn’t believe it when I heard what sounded like an airplane. It happened in the space of a few seconds, I looked over the bike to my left, there was no plane but around 100 metres up ahead, a huge sandstorm was roaring across the road. I often saw them in the distance but never this close, it was insane and with heart in mouth, I just sat there and watched it move right past.

With the sandstorm avoided, the headwinds were now coming on strong. Some bizarre things happen when you’re alone for so long and so it wasn’t too surprising to see another cyclist in the distance but given how far the road stretches, it’s impossible to calculate how far something is up ahead. After pedalling hard for 10 minutes, I was relieved to see the gap had closed but another five minutes on, I realised why:

It wasn’t a cyclist I had closed the gap on, it was a signpost and you can probably imagine how hard it was to accept the signpost would not be cycling with me that day. I knew then, I was suffering from heat exhaustion. Headache, confusion and every other symptom.

“Stupid me”. Something had been on my mind that morning and I should have stayed where I was to let it pass, but I didn’t and for the first time on the Africa bicycle tour, I had truly bitten off more than I could chew. 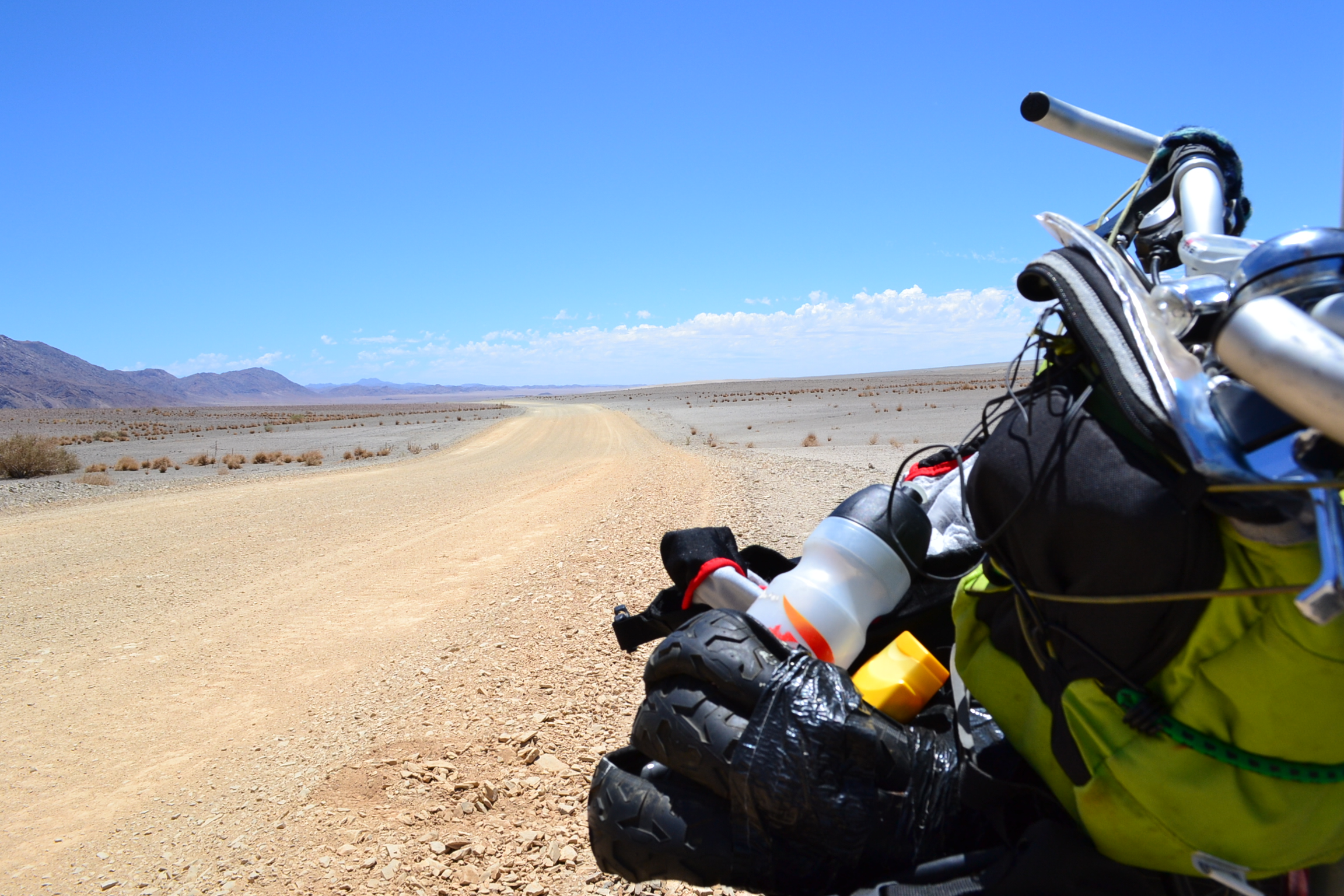 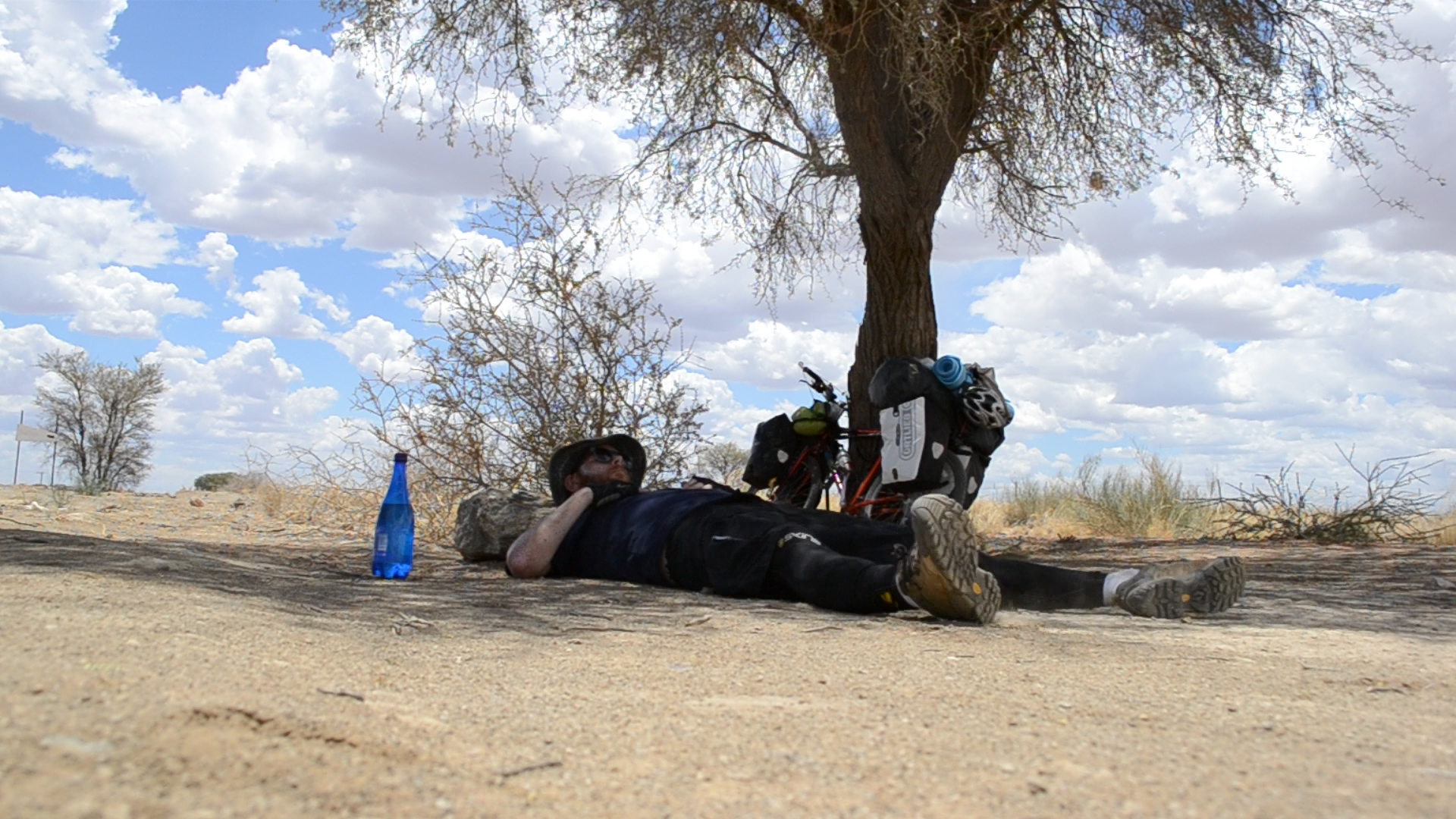 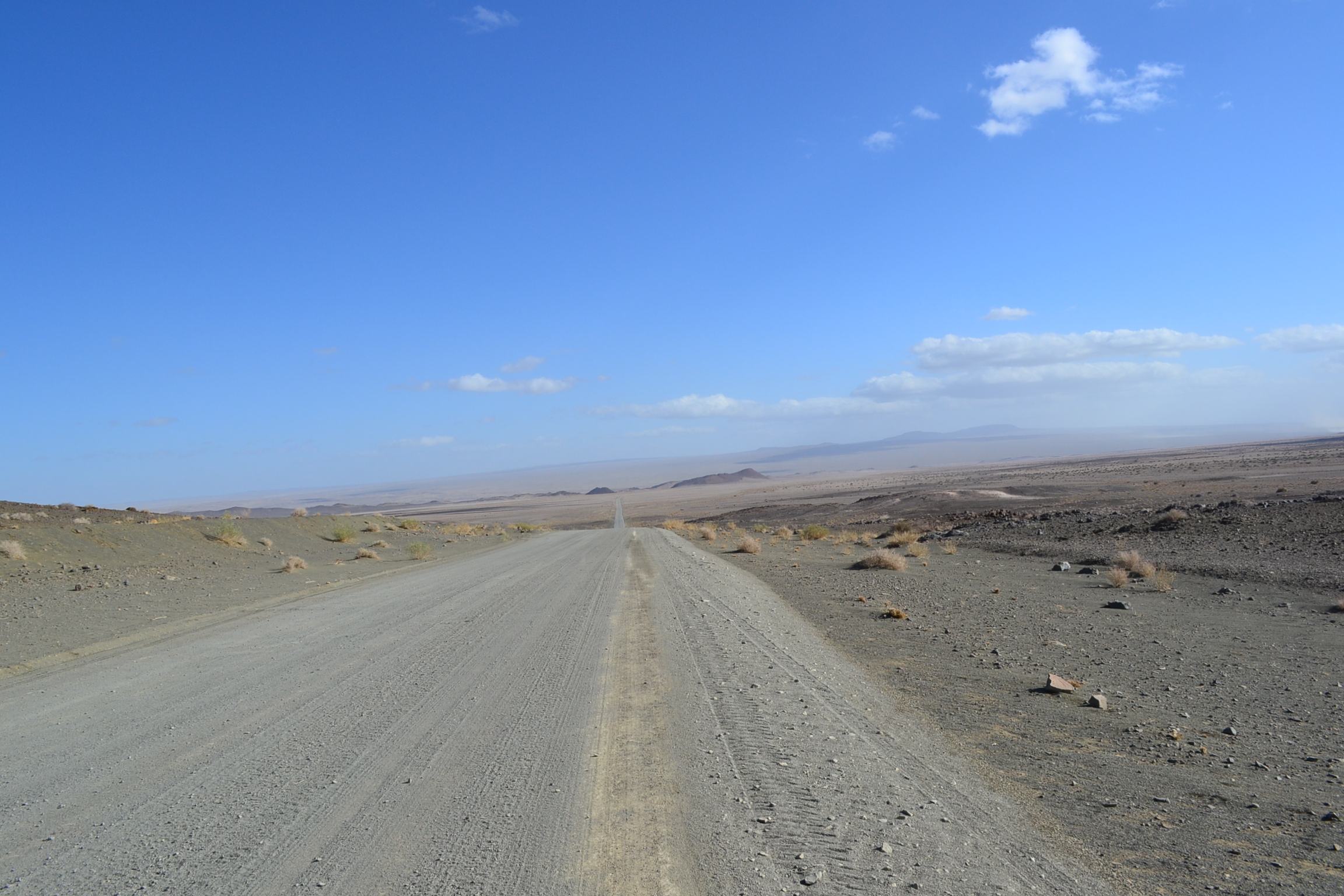 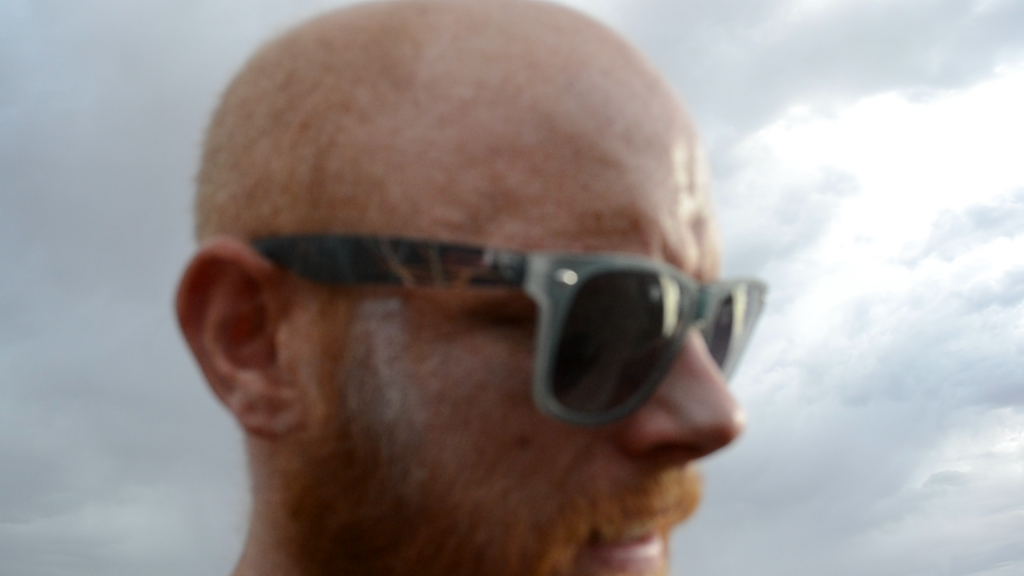 By now the wind was howling around the plains as thunder storms rolled loudly in the distance. Despite my exhaustion, I remember thinking Toto’s “Africa” would have suited the moment but still, the last 10km continued to be horrendous. The road was so terrible, I was now pushing the bike on foot and stopping every ten feet. I’ll never forget how completely isolated it felt and to be in such bad condition and it took everything to keep moving.

The truth is, not everything is as it seems. The real storm all day, and what was bothering that morning, was nothing to do with weather. It was because I was alone. At the camp entrance, I dropped the bike and sat looking back over the plains. It felt good to have been able to push through it and more proof that “nothing lasts forever”. And it was then, when I heard the voice from behind which brought an end to the storm:

Man, was I so glad to see them. 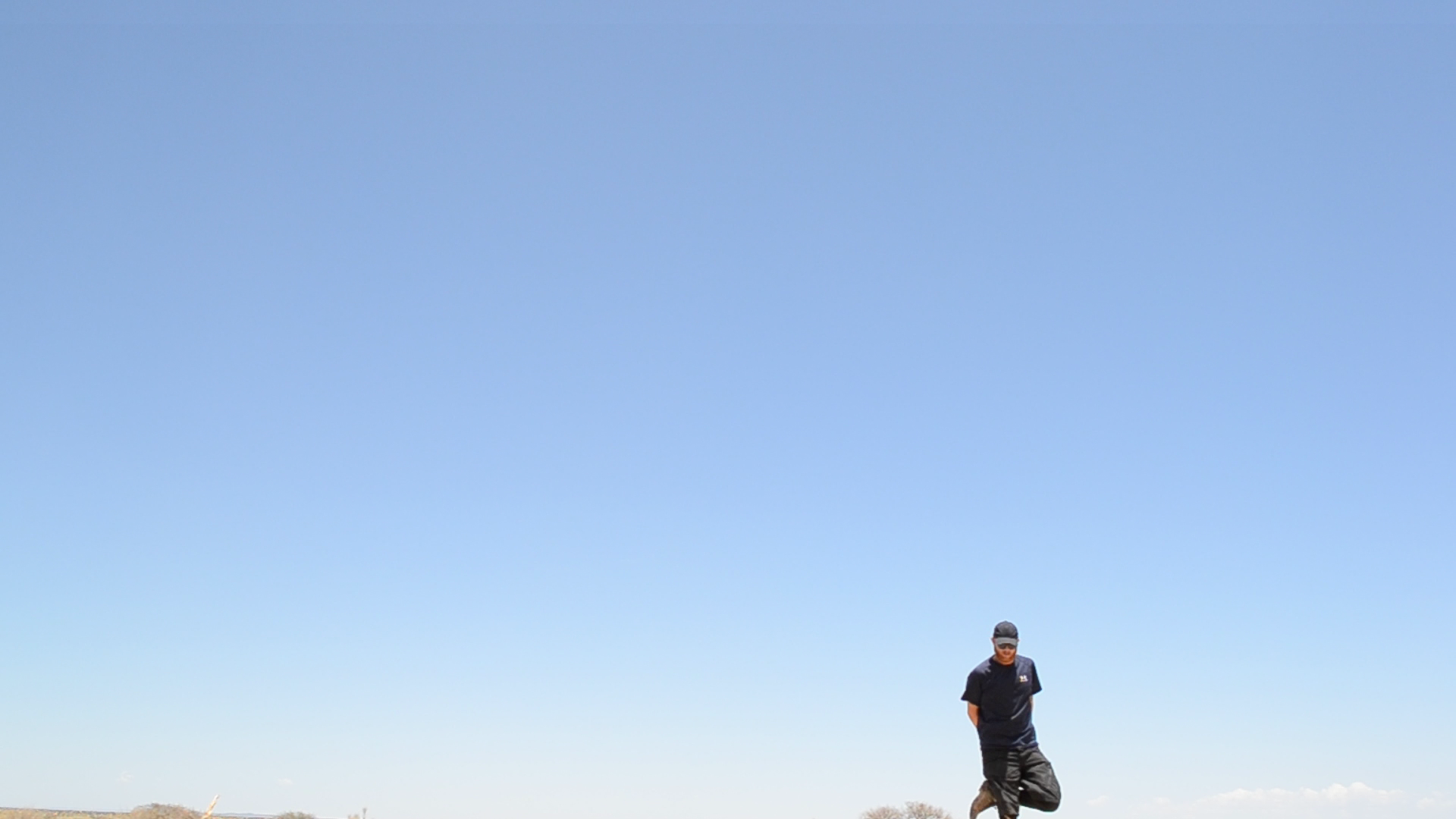 The truth about being along

I mentioned having high hopes for travelling by bicycle in this isolated part of the world and what I could learn from the experience of being alone but as you can probably tell, it didn’t work out as expected. Feeling as though I want to be alone is natural and okay but being so far out of touch reveals only one thing – that there’s no need for it. Being isolated is not good and being in that position only teaches you exactly that. It’s sobering how easily the wild can make sense of everything. I thought to myself how this would have been a great, hard hitting lesson to anyone who suffers from depression. Isolating yourself is definitely not the answer, you need the opposite – talk to someone.

This also reminded me for the importance that this trip is in aid of Irish child cancer charity Aoibheann’s Pink Tie, an organisation who make sure the family of children with cancer in Ireland know, that they are not alone. 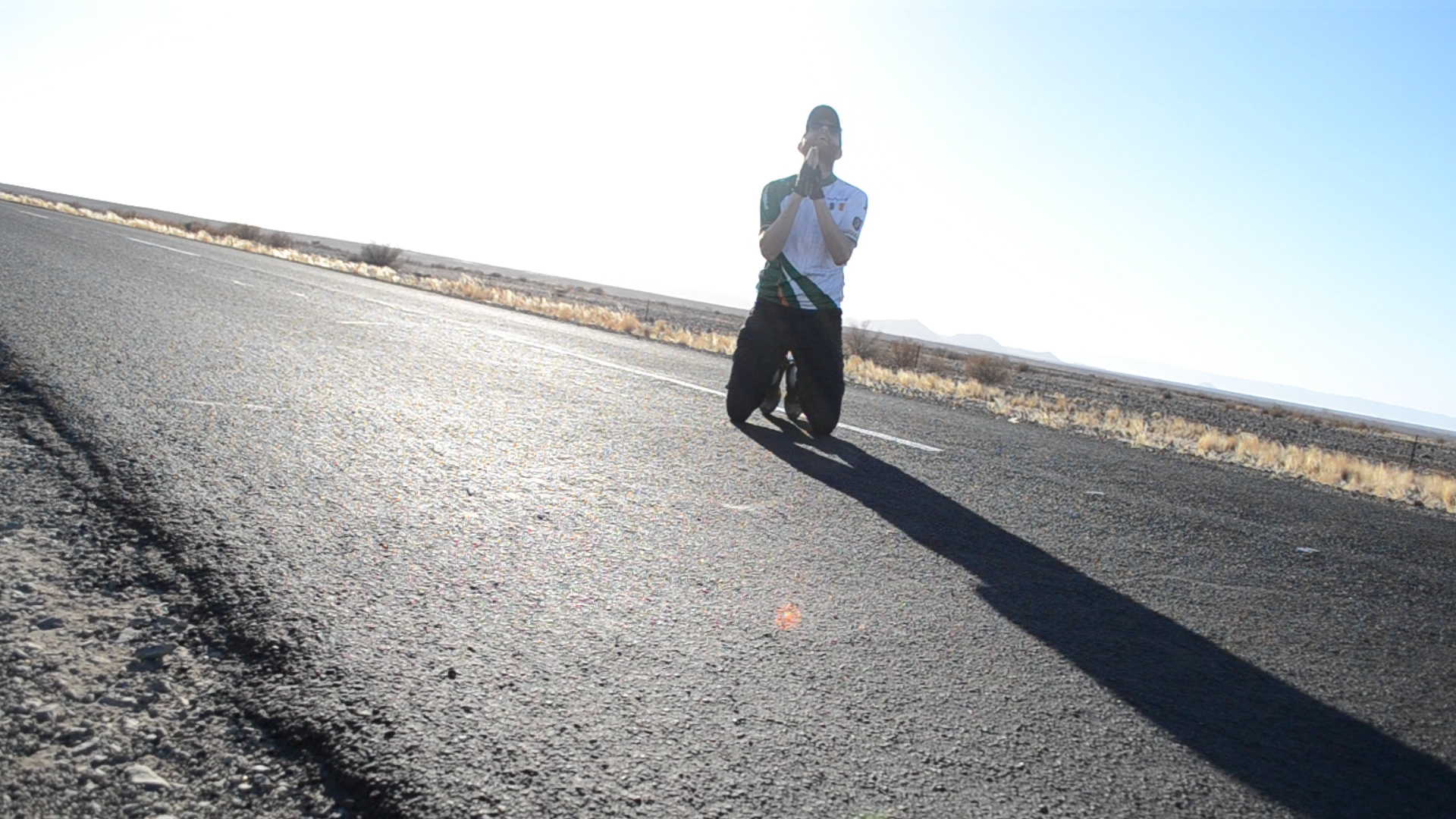 Back on tar roads 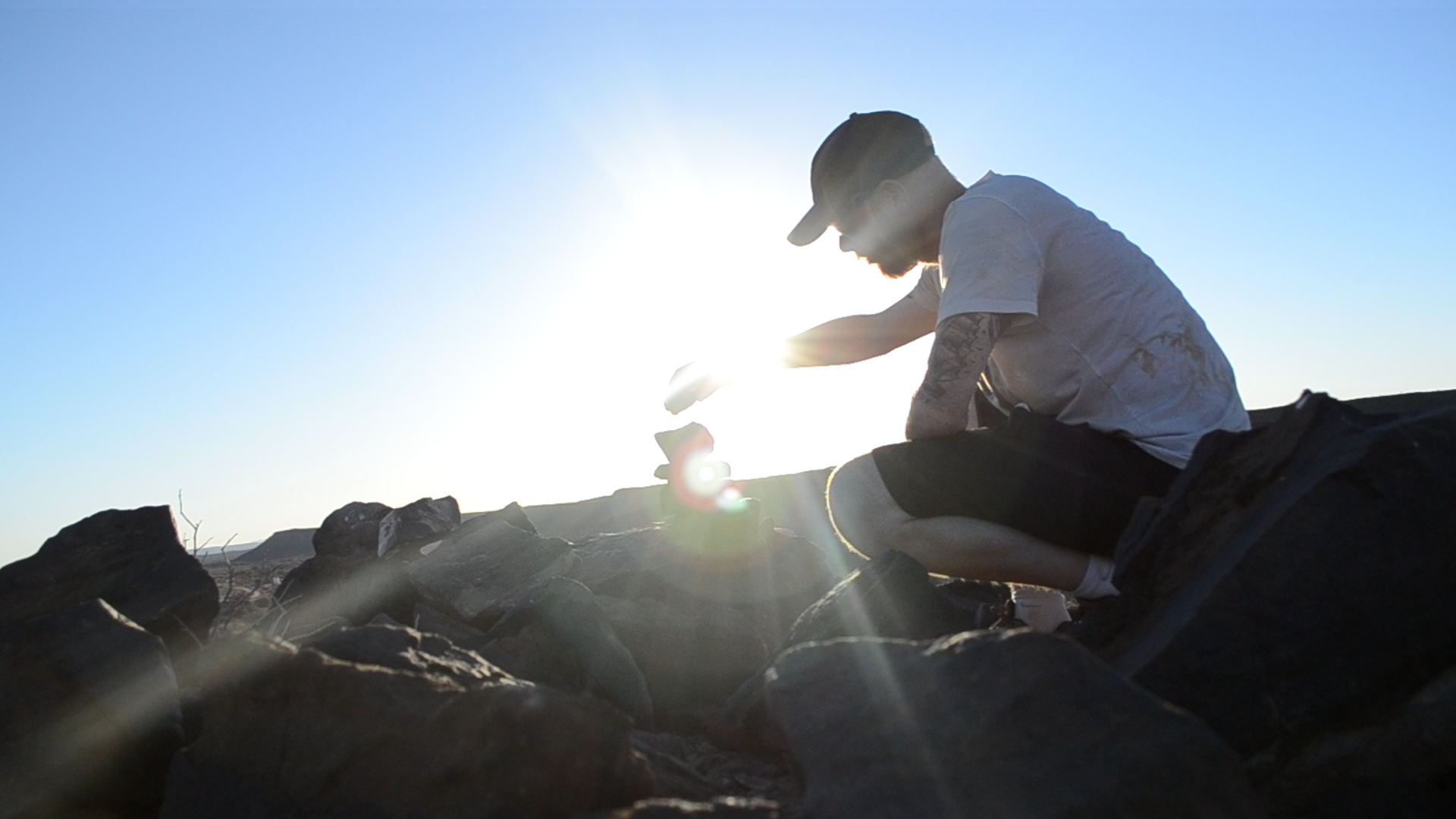 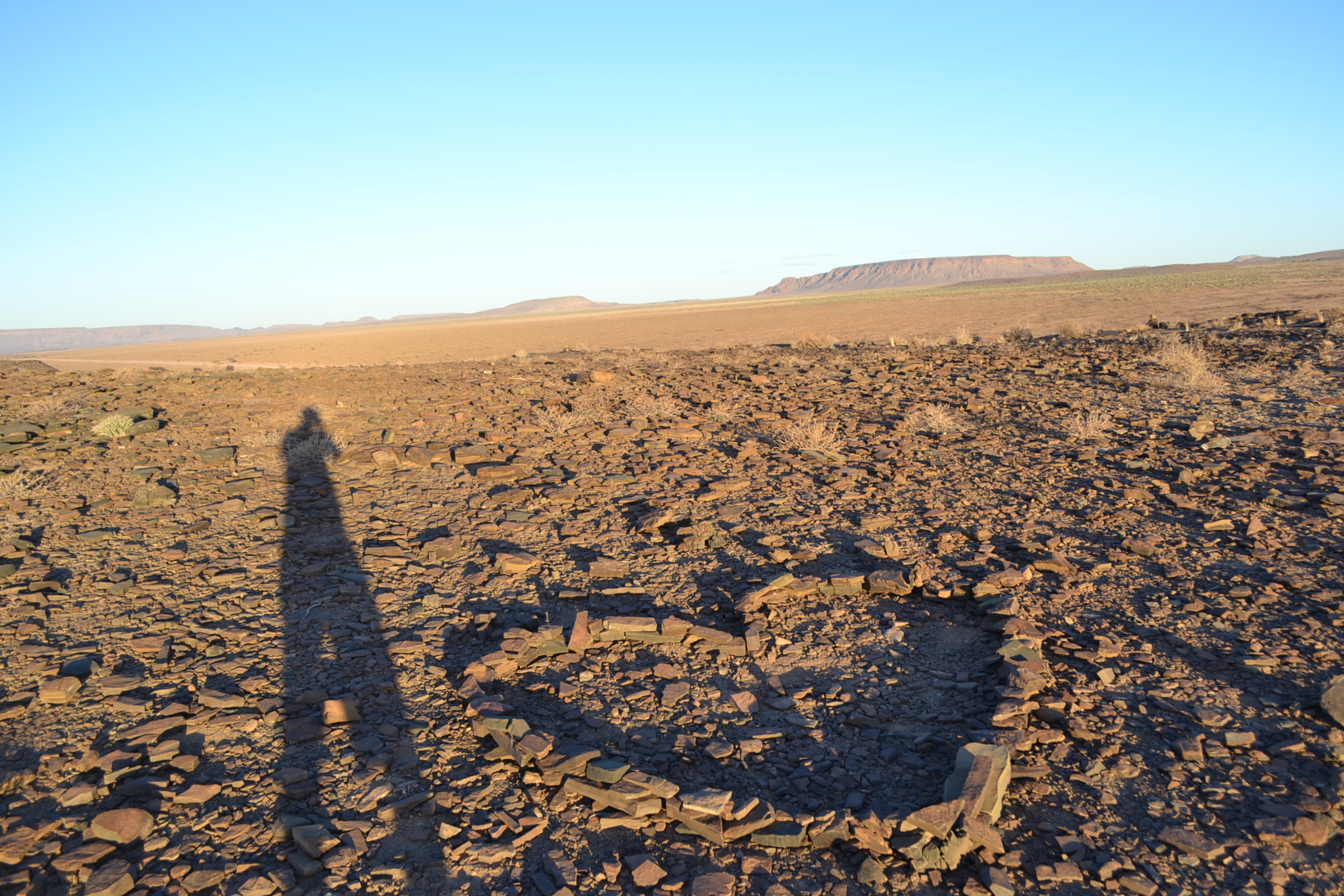 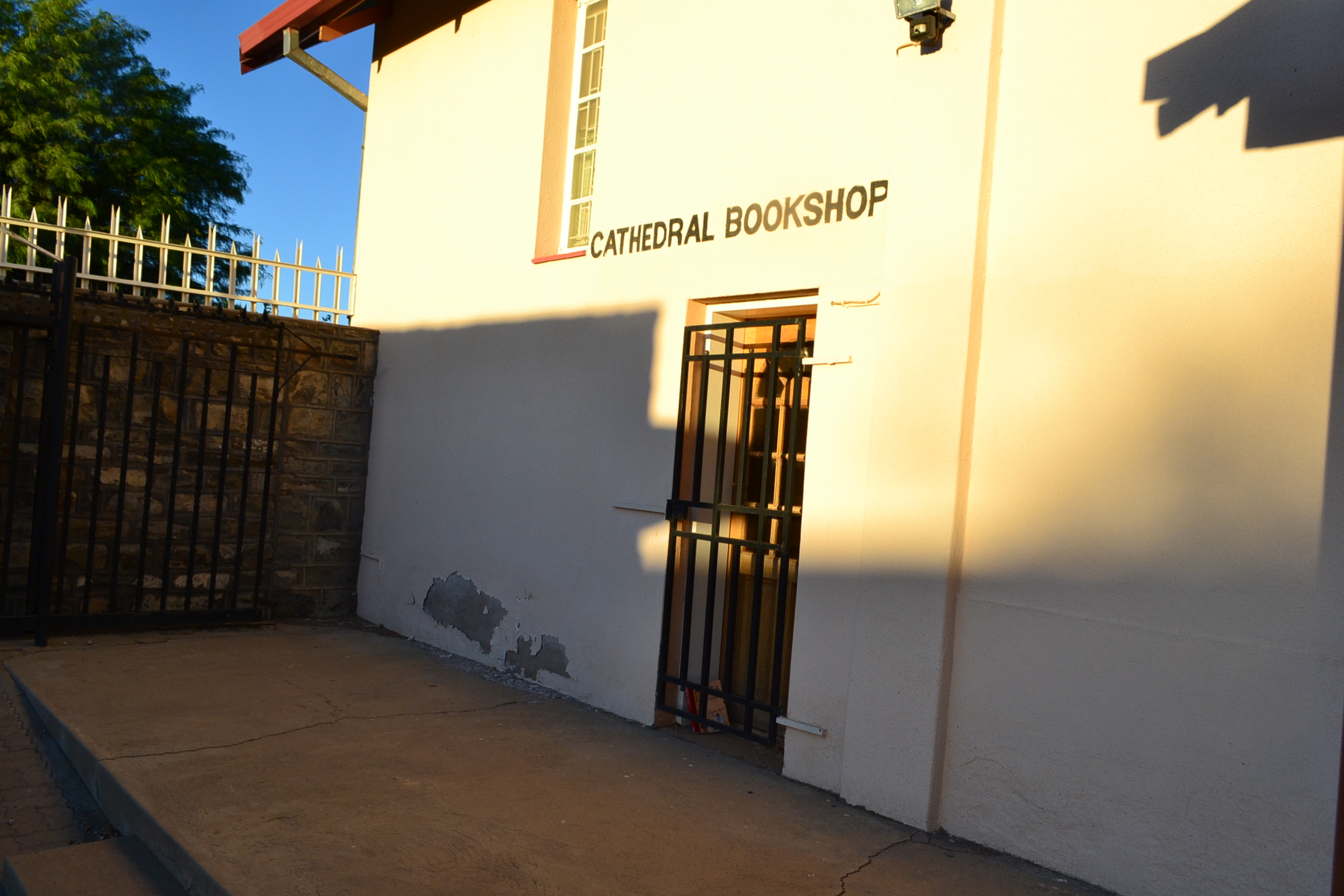 I left the nuns my books as a thank you in Keetmanshoop. The days that followed were admittedly boring and I even took a lift to the next town on one of the days.

So did it have the profound life changing effect I thought it would?

I don’t use the words lightly when I say cycling Africa, these landscapes, animals and night skies are mind blowing. It’s clear they’re all beautiful parts of nature but really, none of it is nearly as important as the people in your life. It was a great first experience but I was wrong to expect meaning in a world without people. Without people, there are few memories, people are the reason we do everything and with regret sometimes we stupidly take them for granted. Maybe this explains the signpost cyclist and the relief of meeting the Landrover tourists, the “something” I was missing all along was not a thing at all, it was someone.

I’m writing this post in the back of a church. We agreed that in return for a bed, I would give them 90 rand and a promise to attend mass this evening .I’m not religious but wait, not everything is as it seems-it’s perfect, I’ll be surrounded by people again.